Throw in nuts, grate some orange zest into it or just add some Cadbury’s Gems to it – it’ll be gone before you know it anyway. 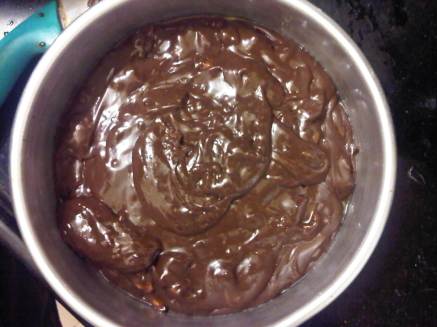 In August 2014, a chapter from Roald Dahl’s Charlie and the Chocolate Factory, which had been edited out of the first edition, was published for the world to read. In what was meant to be the fifth chapter, Willy Wonka leads the children into the Vanilla Fudge Room. Here’s what it said – “In the centre of the room there was an actual mountain, a colossal jagged mountain as high as a five-storey building, and the whole thing was made of pale-brown, creamy, vanilla fudge.”

All I could think of was breaking off chunks of this towering vanilla fudge mountain, dunking them into the chocolate river and gobbling it up quickly. Of course, it would have meant severe punishment at the hands of the Oompa Loompas, like becoming a Fudge Sludge or something equally terrifying like Cornelius Fudge (for the uninitiated, that’s the former Minister of Magic in the Harry Potter series)

And so, it’s simpler to make your own creamy chocolate fudge, and especially with a no-fuss recipe like this one. I got my fudge recipe from a friend ages ago, which I have tweaked and changed around since. Use good quality dark chocolate when making fudge because it really is the star here. When I travel, I end up buying organic and fair trade chocolate as well, mainly for fudge and cookies. As the chocolate melts with the condensed milk and butter, it becomes a thick river of molten chocolate that would make Willy Wonka very proud. And the smell will drive everyone into the kitchen – be warned, it’s really hard to keep the fudge safe from greedy, prying fingers.

It’s such a versatile recipe that you can throw in nuts or keep them out, or add orange zest or swap the vanilla for a drop of orange blossom water. My nephew tops each square with a Cadbury’s Gems roundel because he claims it’s prettier that way. Whatever you try, the result is still a glistening slab of fudge, dense and gooey at the same time.

Once the fudge is ready, you can cut it into squares and put them into little reusable mason jars to gift to friends as well. I have even chopped it up coarsely and served it as Cockroach Cluster at a Harry Potter themed party. Most of my friends prefer this fudge to a bottle of wine. Or actually, with the bottle.

Method
*Grease a shallow rectangle-shaped pan and keep aside.

*Once the sugar dissolves, it forms a sort of crystalline broth at the bottom of the pan.

*Add the condensed milk and stir constantly till it becomes a smooth paste.

*Now add the chopped chocolate and continue to stir.

*Once the chocolate melts, keep stirring until the mixture reduces by a quarter.

*Add salt and the chopped nuts and continue to stir another three minutes.

*Pour the mixture into the greased pan and let it cool.

*Leave it overnight to set or at least for six hours.

*Cut into pieces and well, let the Oompa Loompas stew as you eat the fudge.

*Best served with a cup of piping hot coffee or cold milk.